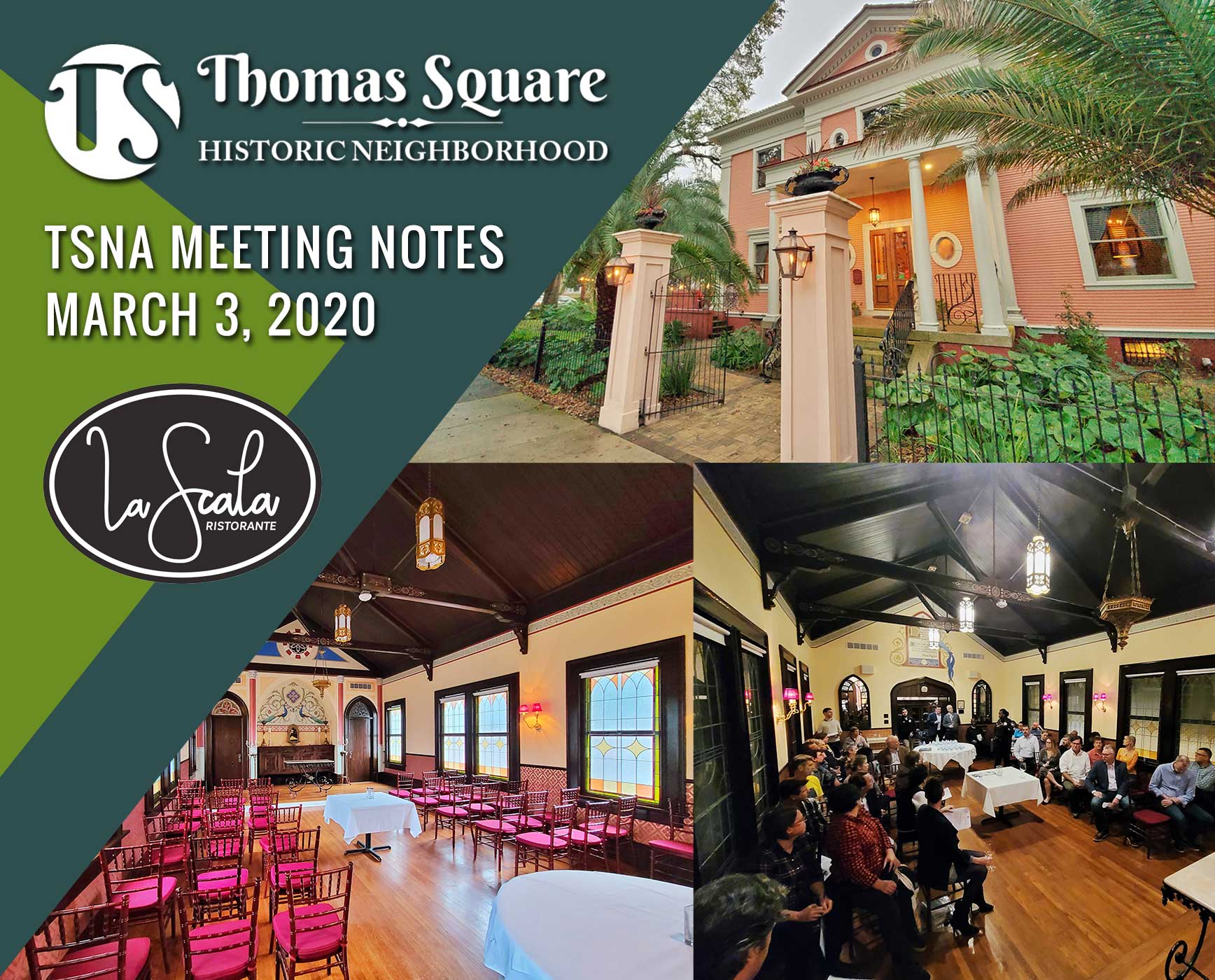 GOOD NEWS! The Train Federal Quiet Zone is estimated to be 18-24 months away!

Funding has been secured and to be signed for in April 2020. Project Bidding in May 2020 – decision 2-10 months. Construction estimated less than 6 months. **Please read expanded train notes further down the page.

Alderman Walk – date TBD – to shine light on neighborhood issues and discuss solutions (crosswalks, trashcans, sidewalks, safety, traffic, intersections…) We will schedule and announce when a date and time is determined.

The Great Savannah Litter Pickerup is scheduled for Saturday, May 2nd!  Join the entire city as neighborhoods join together to clean up the beautiful Hostess City of the South and our very own Thomas Square Neighborhood & Starland District.

We will soon have an online form for volunteer neighbors and businesses who have security cameras (any type of video system, professional/Nest/Ring Doorbell…) to sign up to help with future crime investigations. If something happens in the area of one of your security cameras an officer would contact you and ask if you would like to volunteer security footage of the time period the crime may have occurred to help investigations. We will announce and send an email when the form is ready.

Thank you La Scala for hosting the first 2020 TSNA Meeting in your beautiful chapel!  Everyone was excited to be there and commented on how amazing of a space it is.

Thank you to everyone who attended!

Welcome to the first Thomas Square Neighborhood Association meeting of 2020.  Thank you for being here!  Thank you to La Scala for hosting us, and working with our schedule… and thank you for your patience as we had to postpone our original meeting date from Feb 18th to tonight.  We live in one of the most dynamic areas in Savannah because our historic neighborhood is interwound with a booming local business environment.  We are one of the most growing areas of Savannah with houses being restored, new ones being built, and new businesses being established all the time.  As a neighborhood association we are here to help communicate your voice to the city.  And our new, wonderful city council is ready to listen to our needs and help us improve the Thomas Square Neighborhood as we continue to grow.

Introduction of the 2020 Board Members:

Detric introduced himself and spoke of future events that will help our neighborhood grow in the right direction like the “Alderman Walk” that will be scheduled soon to point out areas of the neighborhood that need attention like crosswalks, trash cans, and traffic/intersections, & more.  He also spoke of good news about the train Federal Quiet Zone that Virginia Mobley, Head of the Train Committee elaborated on later in the meeting.  Thank you Detric!  Congrats!

Introduction and Congratulations to Alderman at Large Post 1, Kesha Gibson-Carter.

Kesha introduced herself and spoke about how she is working non-stop to help the City of Savannah & Thomas Square.  Thank you Kesha!  Congrats!

Special presentation about recent crimes and answering questions from neighbors.

Click below to view a PDF of the handout by Capt. Tony Reid, Cpl Barry Lewis, Apo Rebekah Helmig, and Apo Johnathan Penn

for talking with neighbors about the job of code enforcement and answering questions.

We will have the funding for the required crossing gates!   GADOT will be install the gates and establishing a better train crossing at Victory and Bull.

We are looking at an estimated 18 to 24 months.

Working with the City Council and City Manager to sign of on the application is our job.

What has happened so far:

Thank you for your 400+ train reports!  This information is being sent to the city on a regular bases to help give a snapshot of how the trains are affecting the neighborhood.  Please keep reporting.

We have new horns for the trains the lead engine decibel range from 96 to 110 at 100 ft forward in the direction of traveled and have been arranged so that the engineer can operate it.

Currently Under Federal Railroad Admin Rule 49 CFR part 222 they are required to:

Blow at least 15 second and no more than 20 second in advance of a crossing.  This does not work well in an urban area like our neighborhood.

The FRA  says 2 long and 1 short and 1 long repeated until the locomotive is clear of the crossing, but the engineer retains the authority to vary this pattern for crossing in close proximity and in emergency situation

What the Train Committee has been doing:

We have met and continue to meet with the WATCO (the new train company that started leasing the tracks in Sept. 2019) about the horn volume and frequency of the blast.  We have a city staff member who is working with us and has adopted this project personally even when the former City Manger and former City Council did not support working with the railroad or establishment of a Federal Quiet Zone.  Because these efforts we now have funding available for the proper safety equipment at the intersections.

WATCO (train company) is working to improve the tracks and crossing conditions but in the meantime WATCO has agreed to move to the top of the list five or six problems that we have. So from you, the neighborhood, we need suggested intersection and track problems that you know about.

And along this line we have engine numbers that if it really is loud, long etc    If you can make a note.  And pass it on thru the train reporting site. The group will be having a sit down with WATCO and some engineers in April and this information will be helpful.